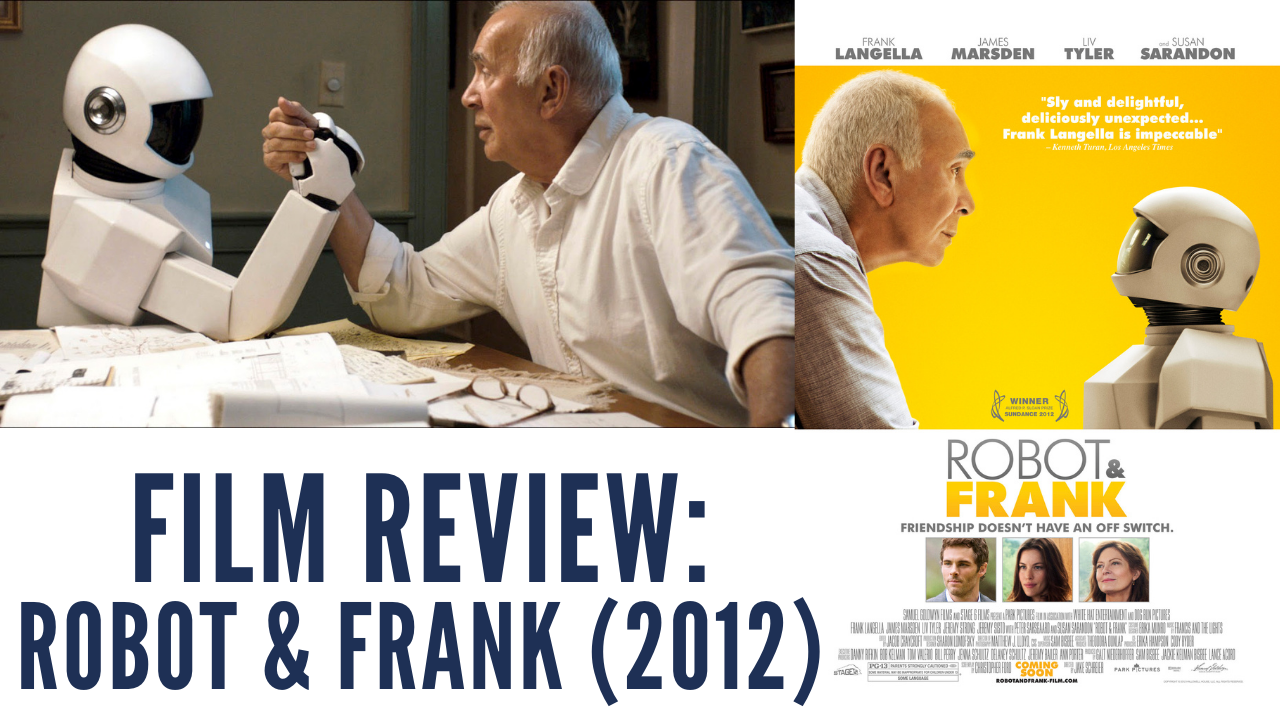 In this interesting film, Frank is an elderly ex-convict who befriends a robot reluctantly, after his adult son brings it to his home.

As of yet, we still have not seen robots that can actually live in house with someone and complete all their tasks, so that puts this film in the category of sci-fi/comedy/drama.

The main character Frank is a former jewelry thief, who has a couple of adult children who realize taking care of him as a bit of a burden.

What was their solution?

They buy him a live in robot. The son was more in charge of the set up and brings it to his house.

The robot is programmed to provide Frank with "therapeutic care, including a fixed daily routine and cognition-enhancing activities like gardening."

Initially Frank hates the robot, until he realizes that the robot is programed to learn ANY recreational activities, including lock-picking and theft.

As a result, Frank begins to really enjoy the robot as a companion that serves as a tool to reawaken his kleptomania.

His urges to steel are so strong, that having the robot by his side causes him to even dream up a bigger scam to steal from a rich developer who is heading up the library re-development project.

Out of guilt, the daughter returns to help out Frank, but after developing a fondness and connection with the robot, he doesn't want to turn it off.

She insists on "quality time" which for most normal elderly people would be welcome and appreciated, but it reveals that the robot has enabled Frank's dark side so much so that he sabatoges his daughters efforts and frustrates her on purpose so she'll turn the robot back on to clean up after him.

Ultimately, in the end, Frank keeps getting what he wants, and the robot stores in its memory all their exploits.

Finally, to escape the law Frank, pretends he is ill, and tries to prevent anyone from getting into the robot to access it's memory.

Finally, in the end, Frank realizes that the robot is only worsening his mental state, and he has to move into a full time care facility to cope with his dementia.

All in all, the film is interesting, yet unrealistic especially with the interaction with the robot.

The futuristic smartphones and tablets featured in the film were designed by Justin Ouellette of Tumblr, and the robot was created by Alterian, Inc., a Los Angeles-based effects company notable for their costume design for Daft Punk.[1]

The filmmakers wanted to emulate the style of caretaker robots made in Japan, and the design also needed to allow a human actor inside the robot suit, played by Rachael Ma.[6]

One common theme in this film that is apparent is attempting to establish this connection between how humans and robots will interact.

Yet again, for this to appear realistic on screen a human actor must be inside a robot suit for it to even be slightly realistic.

The Honda ASIMO, an example of the Japanese robotics technology that inspired the human-like design of the robot in the film.

The film was shot in 20 days with a budget of $2.5 Million. It grossed only $4.9 Million in the box office. Most people may have never heard of this film.

In an article in the Nerdist,  "Director Jake Schreier Gets (Robot &) Frank With Us" from September 9, 2012, they reveal According to Schreier, "the heat caused the person inside of the robot suit, dancer Rachael Ma, so much discomfort that she had to be replaced with another actress, Dana Morgan, for two days of filming."

"Though Ma was initially tasked with providing Langella with the robot's lines, it became impossible for her to perform both the physical acting and lines simultaneously, and the task was given to Langella's nephew, who was a production assistant on the set."

Again, as a sci-fi film, this film is no different from many depictions we've seen of robots as far back as the 60's and 70's.

Yet, the appearance of films like this cause more and more people to overestimate what is possible with robotics.

They barely pulled off the depiction of the robot, AND they had to use two actors to do it. If anything, this film proves once again, that human ingenuity, skill, artistry, and storytelling are far more dynamic than robots ever will be.

Will narrowly intelligent robots play a part in the future? Of course.

Will they be companions that enable our virtues, vices, and cure our loneliness, most likely not.